Having secured a rich history in many ancient Asian healing practices, medicinal mushrooms have been prescribed and used for countless ailments for thousands of years. As modern medicine rediscovers these ancient superfoods, there is good evidence that mushrooms are among the most powerful functional food in a growing cancer-fighting and cancer-prevention arsenal.

Modern research confirms what many traditional healers have known for centuries – that mushrooms contain some of the most potent, yet safest medicinal ingredients found in nature. What’s more, most of these ingredients cause very few side effects – if at all – even at very high doses.

It is first important to differentiate between the anti-cancer medicinal mushrooms and the countless other common varieties. A quick visit to the local supermarket will reveal culinary mushrooms such as oyster, portabella, and others. Although these have their health benefits, the focus of this article will be on four of the more specialized and not typically commercially grown reishi, maitake, agaricus blazei murill, and turkey tail mushrooms.

It’s clear now that mushrooms are legitimate treatments in their own right for many health conditions, including diabetes, Alzheimer’s disease, and cancer.

There are a few primary mechanisms that most of these functional, anti-cancer mushrooms share when assisting the body during cancer stages or in simple everyday prevention. First is their ability to enhance the body’s first line of defense against cancer − the immune system. When this system is weak or has failed, the mechanism for cancer has a better opportunity to manifest.

Next, some anti-cancer mushrooms exhibit direct antiviral and tumor shrinking abilities. As mentioned above, side effects are rare and mild but it is still important to talk with your healthcare provider before use.

It has been demonstrated that, in some cases, formulas containing multiple strains of different mushroom extracts often exhibit synergistic, complementary, and amplified effects. This is in stark contrast to many of the negative cumulative effects of chemotherapy drugs and radiation therapy methods commonly prescribed in hospitals today. As with research for many alternative treatments, the United States has been late to the party when it comes to medical research on the anti-cancer and overall health benefits of mushrooms.

Used for over 2000 years by sages and shamans and known in China as the “spirit plant” – also known as Mannentake, Ling Zhi or Ling Chi – Reishi relaxes and fortifies both mind and body. This fungus holds a very important place in the traditional medical systems of China, Japan, and Korea.

Ganoderma lucidum, or better known by its common name, reishi, it is one of the most well-known medicinal mushroom in Asian healing arts. The mushroom’s bioactive molecules and polysaccharides have been shown to better activate natural killer (NK) cells reducing cancer metastasis. NK cells are lymphocytes that perform immunosurveillance within the body, constantly on the lookout for “immuno-alerters” signaling tumor presence.

Reishi also has been shown to assist in slowing the growth (angiogenesis) of tumors as well as triggering programmed cell death in malignant cells. Currently, there is data to support the potential use of reishi as, at the very least, an adjunct therapy for colorectal cancer, lung cancer, prostate cancer, and breast cancer.

Studies have shown that Reishi helps to: Counter free radicals and fight inflammation. Reishi has potent antioxidant and anti-inflammatory properties. In fact, Reishi compares very favorably to the synthetic anti-inflammatory drug prednisone, without the side effects. Also, Reishi may be able to counter our susceptibility to many aging-associated diseases, thanks to its powerful ability to fight free radicals and reduce cellular damage associated with oxidative stress. Enhance immune system activity. Reishi enhances multiple aspects of the immune system in advanced stage cancer patients and lung cancer patients. Fight cancer. Reishi ingredients are toxic to multiple cancer cell lines in culture – including leukemia, breast, ovarian, cervical, and lung cancer cells, among others. Evidence suggests Ganoderic acid is a potential anti-metastatic agent. Metastasis is the migration of cancer cells from their place of origin to other areas of the body and is invariably fatal. Maitake Mushroom Benefits: The Dancing Mushroom 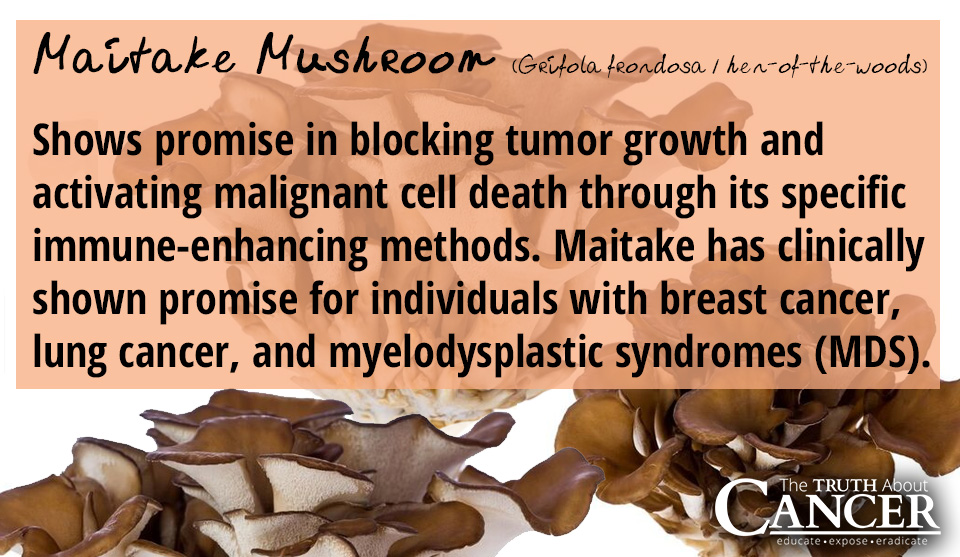 This mushroom made perhaps the biggest splash when a study jointly conducted by the Medical Department of Tokyo University, The National Cancer Center Laboratory, and Tokyo College of Pharmacy showed a complete recovery in 90% of guinea pigs injected with cancer cells (180 sarcoma).

The pattern of other mushrooms was seen again as agaricus blazei murill activated macrophage and interferon immune activity leading to tumor shrinkage, a halt in metastasis, and reduction of future cancer occurrences. As an adjunct, agaricus blazei murill was shown to lessen the side effects in individuals undergoing chemotherapy for endometrial, cervical, and ovarian cancers.

In 1976, a Japanese company patented certain extracts of this mushroom under the name PSK and later PSP. They have since become recognized cancer drugs in Japan. The anti-viral properties of the turkey tail mushroom offer a unique opportunity to target oncoviruses (tumor virus) such as hepatitis C leading to liver cancers, and others. For this mushroom, again studies are showing increased NK activity towards tumor detection and eradication.

It is important to note that drug companies cannot patent mushrooms. Due to this fact, funds typically won’t be allocated to study them unless they come from private institutions or government grants. However, this should be a positive as many studies only seek to isolate one part of a plant or mushroom to patent as a drug.

Isolating one constituent from the others denatures and lessens the broad-spectrum potency of this natural, functional food.” 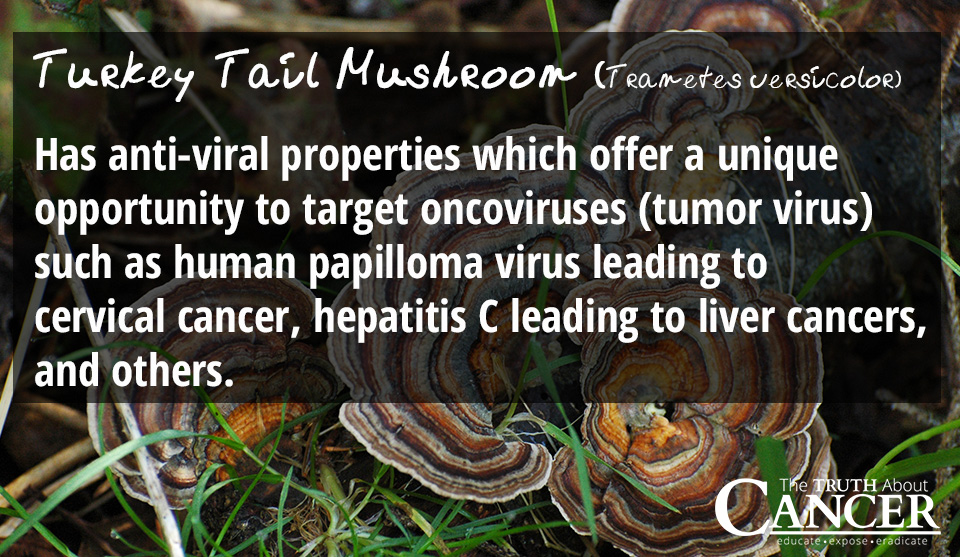 Cordyceps (Cordyceps sinensis) is also known as the Caterpillar Fungus and Dong Ching Xia Cao (Summer grass, winter worm), Cordyceps has long been a part of traditional Chinese and Tibetan medicine. An extremely rare combination of a mummified caterpillar and a fungus, it is found at very high altitudes in the Himalayas, on the Tibetan plateau, and other high-altitude locations around the world.

Cordyceps – both the mummified caterpillar and the fungus – contain many potent bioactive compounds, including cordyceptin, cordycepic acid, polysaccharides, and sterols.

Studies have shown that Cordyceps helps to: Manage blood sugar levels in a healthy range. Emerging evidence indicates that the Cordyceps is likely to prove to useful in the management of diabetes. Improve transplant success rates. Cordyceps protects the heart and lowered the rate of cardiac rejection in an animal model of heart transplantation. When given after kidney transplants, Cordyceps also reduced the rejection rate, improved kidney and liver function, boosted red blood cell production, and lowered infection rates in patients. Strengthen the immune system. Cordyceps boosted production and activity of various components of the immune system in animal experiments. Enhance antioxidant ability. Cordyceps raised levels and activity of innate enzymatic antioxidant systems in animal models. Boost libido. Cordyceps boosts libido and sexual activity, along with restoring impaired reproductive function in animals as well as humans. Improve exercise performance. Cordyceps made international headlines by helping Chinese runners break two world records by huge margins at the Asian Games in 1993. Cordyceps likely improves stamina because it stimulates production of ATP, one of the main sources of energy in our body’s cells. Cordyceps has also been shown to dilate the aorta – the main artery in the body that supplies oxygenated blood to the entire circulatory system – by 40%, greatly increasing blood flow and enhancing endurance. Fight cancer. In laboratory experiments, Cordyceps was selectively toxic for cancer cells, without affecting normal, healthy cells. Bioactive ingredients in Cordyceps including cordyceptin attack and destroy mouth, bladder, prostate, breast, liver, lung, cervical, leukemia, and colorectal cancers as well as lymphoma, melanoma, and neuroblastoma in culture. Medicinal Mushroom Supplementation: Choosing the Correct One for You

Mushrooms and mushroom supplements come in many different forms for health and wellness. These functional foods can be raw, powdered, liquid, and infused into other products. Each has their own sets of advantages and disadvantages.

Raw: Unlike consuming fruits and vegetables, raw mushrooms are not a superior form to consume if you’re looking to reap the health benefits from medicinal mushrooms discussed above. The polysaccharides, antioxidants, and metabolites can be better activated and concentrated using methods described below under the “liquid” category. It is for this reason that if you are experiencing a health crisis or simply looking to improve the functions of your mind and body, raw should not be your first choice. Powdered: Like most other nutritional supplements, mushrooms also come in the powdered form as gel caps or loose. While the gel caps are preferred for daily convenience, the powder can be added to smoothies, juices, or sprinkled on food after it is cooked. Liquid: If you are looking for rapid absorption into the digestive system, a liquid mushroom supplement form is a great choice. In addition, the liquid option offers perhaps the greatest versatility due to the fact that it can be added to coffee, tea, smoothies, soups, salad dressing, and just about anything else you can imagine. Regarding extraction methods, there are three methods used each focusing on distinct end results. Cold water extraction is used to extract extracellular metabolites. Hot water extraction is used to the extract the immune-stimulating polysaccharides. Ethanol/alcohol extraction is used to isolate antioxidants and smaller compounds that are more specific in their bio-activity. Infused: This isn’t so much a category as it is a mere spin off of the liquid and powdered methods. Due to the popularity of mushrooms as a versatile and functional food, manufacturers are going the “value added” route by offering mushroom-infused versions of already existing products. For example, there has been a recent surge of popularity in the mushroom infused coffee bean market. A breakthrough method now allows the infusion of a mushroom strain directly into the whole coffee bean. Labels & Production of Medicinal Mushrooms: What to Look For

Like most food and supplement production, it is now no longer a question that things must be organic. In addition, the “non-GMO” designation is also strongly considered for numerous reasons. Beyond that, mushrooms are good detoxifiers and accumulators of certain environmental particles and elements. Therefore, it is highly recommended to seek out growers and producers that follow strict methods and practices to ensure product purity.

Due to the makeup and properties of some mushrooms, there are dangers that consumers should be aware of. As I’ve covered in my docu-series, the concept of clean foods also applies to mushrooms due to our current environment. Of particular concern are heavy metals and radiation. Food and water contamination from heavy metals is a major problem. The soil and air has been affected by industry and pollution, and that directly impacts our food, water and physical bodies.

Certain mushrooms hyper-accumulate heavy metals which make them great environmental detoxifiers. However, for internal use, these same mushrooms should be laboratory cultivated to avoid toxins they’ve taken in.

There is no ignoring that Fukushima was perhaps the worst nuclear disaster in history. Certain mushrooms are known to hyper-accumulate radioactive particles. As with mushrooms that gather heavy metals from the environment, this is great news for cleanup purposes. For this same reason it is vital to choose mushroom supplements from cultures grown in controlled conditions.

A final note on safety: there are many species of mushrooms that are highly poisonous to humans. It is strongly advised that individuals do not wild gather mushrooms for consumption unless you have done extensive research. Regardless, for the reasons detailed in this article, it is still better if you leave your mushroom supplementation to professional, knowledgeable, and qualified producers who are using strict methods of extraction and preparation. 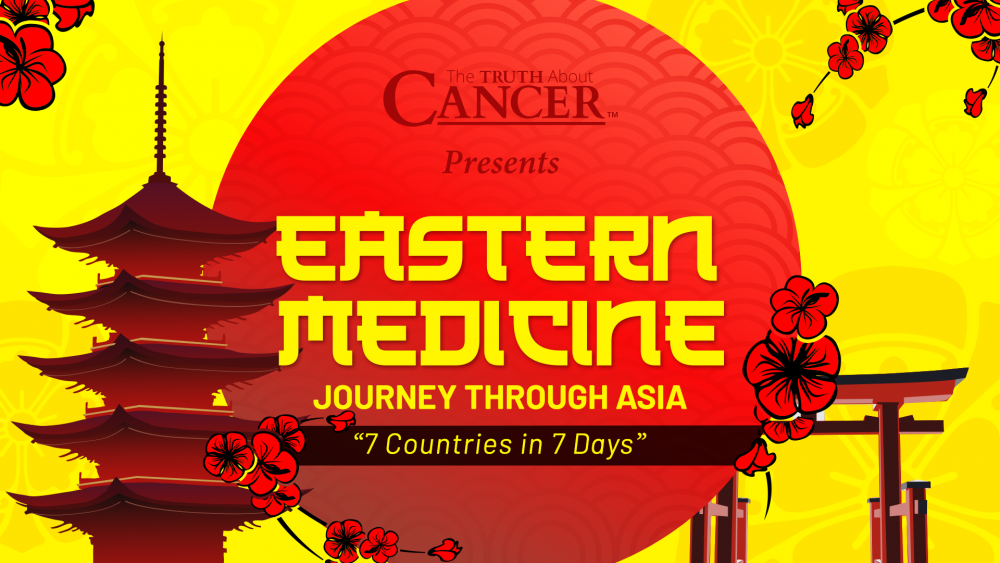 SAVE THE DATE! Eastern Medicine: Journey Through ASIA airs on April 3, 2019. Experts share on medicinal mushrooms and so much more!

The post 5 Medicinal Mushrooms That Fight Cancer appeared first on The Truth About Cancer.