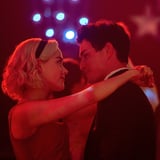 The highly anticipated part two of The Chilling Adventures of Sabrina is now available on Netflix, and once again, we get reunite with our favorite feminist half-witch Sabrina Spellman (Kiernan Shipka) and her wonderfully diverse group of friends. The Netflix Original has already been renewed for seasons three and four, indicating the enormous popularity of the Archie Comics adaptation. It’s undeniable, however, how different it is from previous adaptations of the comic book series, hence the “Chilling” in the title – and part two gets even more sinister. If you’re wondering how appropriate the new season is before letting your kids watch it, read on.

Warning: minor spoilers for The Chilling Adventures of Sabrina Part 2 ahead.

The rating is TV-14 for good reason.
Darker in imagery and tone than part one, CAOS part two includes drinking, some steamy scenes involving the witches and warlocks and Sabrina and Harvey with their new love interests, and some mild swearing. While the sex isn’t very explicit, the act is implied and there are heavy themes interspersed throughout the season. In particular, Sabrina – who is still a teenager in high school – has conversations with her family and friends about her sexuality and whether she is ready to lose her virginity during Lupercalia, a lusty ritual of the Church of the Night that’s akin to the mortals’ Valentine’s Day. Not to mention, there’s a lot at stake here for all the characters as they come into their own in a world that’s brimming with danger and uncertainty.
Many of the violent and graphic scenes can make kids squeamish.
Among the demons that chase Sabrina, wayward familiars that wreak havoc, and spells that go awry, there are a lot of graphic scenes in part two that can intimidate kids and upset them. Some people get killed or mutilated, which can get visually bloody.
There are a lot of satanic rituals and themes at play here, as well as demons and monsters galore.
The world of CAOS is no stranger to shape-shifters and demons, but there are plenty of nail-biting jump-scare moments that are enhanced by creepy sound effects, starting from the first episode. If your kids get scared easily, it’s best to prepare them for the different demons and monsters that will be summoned by those who want to hurt Sabrina. Rest assured, many of them do get punished. The Dark Lord (aka Satan), in particular, makes a lot of appearances here as it tries to sabotage Sabrina’s path toward goodness and convince other members of the Church of Night to do its bidding.
There’s a constant battle between good and evil here, and Sabrina is at the center of it.
Now that Sabrina has signed the Book of the Dead and essentially agreed to do whatever the Dark Lord asks of her, she finds herself constantly torn between good and evil. She starts becoming more and more rebellious to the point where her Aunt Hilda recommends she return to Baxter High and her mortal friends to recalibrate her moral compass. When Satan calls upon her to do its tasks and hurt her peers to get ahead, she struggles to be good. It’s important to note here that while she’s often coerced into something questionable, she’s inherently a good person who would sacrifice herself for the well-being of those she loves.
There is some cheating and subterfuge involved that can confuse kids.
Some characters try to get ahead by cheating their way to winning. Some instances are well-intentioned and for a greater cause, as seen by the Weird Sisters’ efforts to help Sabrina win a competition after being sabotaged. Other instances of cheating, however, are malicious, and these can make kids question what is morally sound. These scenes could open up a morality discussion, so be prepared.
Sabrina wages a huge fight against the patriarchy and exudes confidence.
Now that she’s a fully functioning member of the Church of Night, Sabrina will do whatever she can to overhaul its antiquated and misogynistic ideas that seek to separate witches and warlocks and forever keep the former subservient to men. She challenges her love interest Nicholas Scratch (Gavin Leatherwood) for the Top Boy position at the Academy of Unseen Arts, even though the position has traditionally gone to warlocks. She manages to get into a male-only lounge and later gives the Anti-Pope her deceased father’s progressive manifesto in an effort to start changing the patriarchal system. Despite people like Father Blackwood regularly undermining her efforts, Sabrina continues to work hard toward her feminist agenda. She’s a young woman that kids can aspire to because she has conviction and courage to stand up for her beliefs.
Susie has a new identity.
Susie undergoes strong character growth this season. He joins the boys basketball team in school, comes out as Theo, and finally gets on the path to figuring out who he is.
There is a strong celebration of friendships in this season.
Sabrina may not spend too much time with her mortal friends in this season, but she looks out for them from afar. Before Rosalind and Harvey officially enter a relationship, Rosalind asks Sabrina if it’s OK, and Sabrina gives her blessing. Instead of resorting to cliched dramas about “girl code” and female rivalries, the show promotes Sabrina’s female friendships over any romantic relationships. Roz’s honesty about her feelings for Harvey may have caught Sabrina off-guard, but their friendship is better for it, and it goes to show they’ve come far enough in their friendship not to have any secrets. In addition to Sabrina and Roz’s solid friendship, Theo’s identity is wholeheartedly accepted by his friends, who have always supported him and come to his defense against Baxter High bullies.