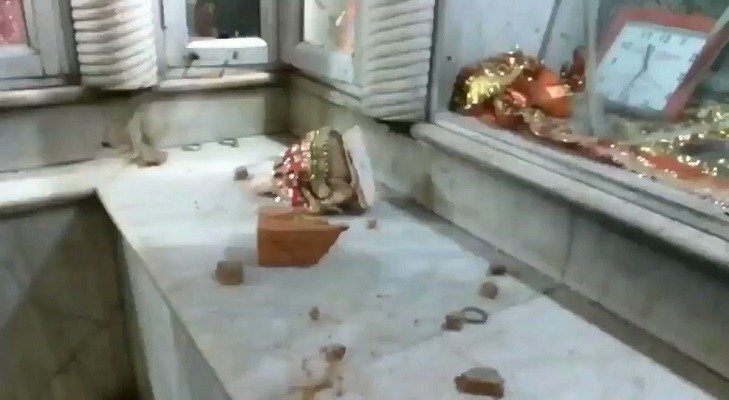 After the horrific incident of desecrating a temple in Hauz Kazi, Chandni Chowk in Old Delhi allegedly by a Muslim mob, the situation seems to have returned to normal. As per Times of India journalist Raj Shekhar Jha, three miscreants have been detained by the Police. One of them is reportedly a juvenile.

A day after the incident, startling reports have been emerging pertaining to the details of the temple attack. On July 1, a mob of 300-400 men barged into Durga Mata Mandir in Lal Kuan in Chandni Chowk area and had desecrated idols present inside the shrine. According to locals who had posted videos of the temple on social media, at around 12 am, the Muslim mob entered the temple and began to thrash Hindus residing the neighbourhood after they tried stopping Muslims from destroying temple idols.

According to Times of India journalist Raj Shekhar Jha, the tensions in the area had increased after local Muslims supported and gathered in large numbers, who shouted slogans in favour of a fellow Muslims, who allegedly attacked and broke idols inside the temple.

That said, deplorable that the local Muslims supported, gathered in large numbers and shouted slogans in favour of a few from their community getting down to this heinous act. Peace and brotherhood will never be achieved with this attitude.

Shockingly, a large number of Whatsapp forwards and groups were created to circulate news of a Muslim’s death to gather people to the spot in large numbers indicating that there was a plan to fuel large scale violence in the area against Hindus.

In a video shared by Pradip Bhandari, CEO of Jan Ki Baat, one witness stated that few intoxicated Muslim men had gathered under their house. As people around the temple stopped them, they brought in more than 300-400 men to attack. He further alleged that Imran Hussain (AAP MLA) came and supported the Muslim mob but no one came in their support.

“As soon as people stopped some muslim men frm drinking whiskey under their house they brought 300-400 more fellow men to attack us.
Imran Hussain (MLA) came and supported them but no one came in our support ” Locals

In another video shared by Bhandari, the priest of the temple can be heard stating that Muslim mob would have killed them had they not closed the door of the temple from inside. The priest also alleged that the mob even abused them.

The Delhi police which chose to refer the communal attack as “altercation and scuffle over parking issue” has tweeted that they have taken legal action and are making efforts to pacify both sides.

According to reports, the Durga Mata Mandir in Lal Kuan in Chandni Chowk area became the target of vandalism by a mob of 300-400 people on the night of June 30, 2019. According to police, this was triggered by a skirmish caused by an argument over parking. When the argument over parking in the area became intense, some people started pelting stones. Later in the night a mob entered the temple and vandalised it. The police have confirmed that Muslim youths in the area attacked the temple.

Union Minister and Chandni Chowk MP Dr Harsh Vardhan visited the site this morning and condemned the incident while appealing for peace. “The kind of thing done to the temple is unforgivable. I have been told that Police is already in action, culprits will be arrested soon and punished. I appeal to the people to maintain harmony,” he said.