China has always been known for its long-cultivated history and culture. It’s an old country that has built its own characteristics over time. Just like every other country, Chinese etiquette has absorbed the very heart of Chinese culture. By learning how to greet people in Chinese, you’ll be getting a good start in your study of the Chinese language while also becoming a bit more familiar with Chinese culture!

Greetings are always one of the first things someone learns when studying a new language. They’re the key to ensuring the people you talk to have a good impression of you right from the beginning. A proper Chinese greeting can really open up the gate to a fuller, desired conversation.

If you’re a beginner in learning Chinese, the very first question for you to ask is “How do you say ‘hello’ in Chinese?” There are different Chinese greetings for a number of occasions, so now let’s help you grasp the gist of greeting in the Chinese language like a native! You’ll know all about Chinese greetings in no time!

1. Greetings for Different Times of Day

Like nearly all cultures do, the Chinese language uses different greetings, determined by the different times of day. The Chinese greetings here focus on this.

If you’ve ever wondered, “How do you say ‘good morning’ in Chinese?” you should know that there are three ways to say good morning in Chinese.

Though they all mean “good morning” as a greeting in the morning, there is a slight difference between them. 早 means “morning,” which is the simplest way to wish someone a good morning.

Not many Chinese people greet like this, and this is rarely spoken in Chinese culture. We’ll discuss how we greet for noontime in Chinese language natively.

As we mentioned before, this isn’t a usual way to greet natively in China either. When you say these Chinese greeting phrases out loud, they sound too formal and rigid.

“Good night” is a very nice thing to say for Chinese people, especially for teenagers. An interesting fact about its pinyin: If you take all the capitals of those letters, they represent: 我爱你，爱你（wǒ ài nǐ，ài nǐ , which means “I love you, love you.” Thus it has become an important thing for young Chinese couples to say to each other. You can also say this to your Chinese friends to show your care for them. 2. How to Say Hello in Chinese

Your Chinese greeting vocabulary won’t be complete until you know how to say “hello” in Chinese, so here’s a few phrases to keep in mind.

1- The most plain and simple way to say “Hello”:

您 is a polite way to say “you,” usually to people who are older or are in a senior position. When Chinese people are greeting like this, they will usually shake hands with you; when you do, remember to lower your head a little and nod your head slightly to show respect. Remember that Chinese etiquette and body language are just as important as the words you use.

3- How to say “Hi” in Chinese in different forms:

These Chinese sayings are often used between young people. The Chinese words here are only translated in Chinese from English based on their pronunciations, thus they’re not a formal way to greet. Don’t worry to much about this! All you have to say is the same thing back at the person!

4- How to Say Hello on the Phone

This is a special Chinese word for the first greeting people make on the phone. 喂 by itself would sound too indifferent, so you might want to add 您好 as well to greet the caller as we mentioned above. If you don’t know who’s calling, you can also make further inquiries such as 请问您是哪位? (qǐng wèn nín shì nǎ wèi?) meaning “Can I please know who this is?”

These ways of greeting can make Chinese people feel warmth and friendliness from you since they’re very native ways to greet. Some people may feel bewildered at the thought of why Chinese people would greet by asking if they’ve eaten. This is common due to Chinese culture from a long time ago.

In ancient times, many laborers in China had a very hard time fending for themselves. At that time, people often thought about whether they would have enough food or not, and thus the thing people cared most about was if one was able to get food. As time went on, the habit of asking “Did you eat?” became a common way to greet and has been passed on to many generations till now. With the continuous development of China’s modern culture, this habit is gradually being replaced by some universal polite expressions.

If you ate already, you can answer 吃了，你呢？（chī le, nǐ ne）meaning “I did, how about you?” If you haven’t eaten yet, you can simply respond 还没 (hái méi) meaning “not yet.” 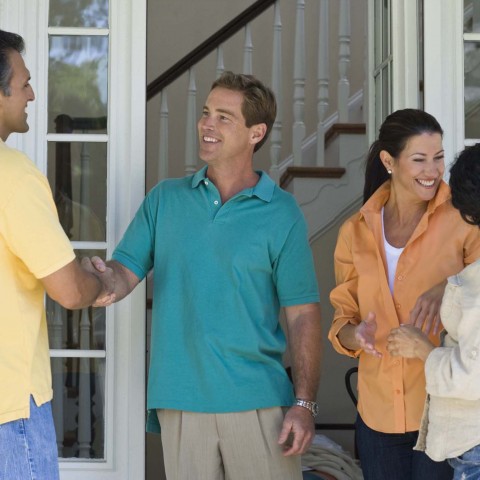 4. Greet People that you Haven’t Seen in a While and More

When learning Chinese greetings and introductions, it’s important to know how to appropriately greet someone you haven’t seen in a while—even friends are sometimes apart for days or longer, after all! Learn more about the best Chinese etiquette about how the Chinese greet people they’re meeting after being apart for some time.

Usually, you want to answer 挺好的 (tǐng hǎo de) meaning “pretty good.” Even if you’re not feeling good—if you don’t want to get yourself into a conversation where you’ll have to explain all that—you should still say you’re doing well just to greet back. If the person is a close friend of yours and you’re willing to explain the situation, you can anwer 不怎么样，因为…… (bú zěn me yàng, yīn wéi…) meaning “Not very good, because…”.

This English saying—which is not grammatically correct—actually comes from the Chinese language. You can say 好久不见 as either a formal or informal way to greet someone in Chinese if you haven’t seen them in a long time. Usually an answer to this would be 是啊 （shì a), and they may next say 我上次见你还是在……的时候 (wǒ shàng cì jiàn nǐ hái shì zài …de shí hòu) meaning “the last time I saw you is when…”.

This is another typical way to start a conversation. People who ask this may not really expect an answer, and instead are most likely just trying to warm up the conversation before delving into it.

This Chinese greeting isn’t asked very often either, just like how in English when people ask it, they’re not actually looking for answer, rather just a way to greet. You’ll want to answer 没什么啦 （méi shén me la), meaning “nothing much,” unless you really want to talk about something new.

啦 is one of the most often-used final particles in Chinese, so remember to add it in this phrase in order to make it sound more natural and friendly—otherwise, it may sound cold to the listener. You can learn more about Chinese final particles later as they are extremely helpful and can change the tone of a sentence dramatically.

The Chinese version of this greeting phrase is similar to saying “Have fun today!” However, it would be too raw to speak the literal meaning in Chinese, as native Chinese don’t usually greet like this.

To answer, you can simply reply 好的（hǎo de） meaning “okay” in English. Of course, when you can further grasp the gist of some final particles, you can use them at the end of the sentence to make it sound more casual and friendly.

再见 is the most common way to say good-bye, though its literal meaning is “meeting again.” It can be used for all occasions, such as leaving a party, hanging up the phone, and so on. You can also use 拜拜, which is formed based on the sound of “bye-bye” in English.
待会见 means “see you later,” and should be used if you know that you’re going to meet the other person again very soon, usually within a day. Remember to wave your hands in order to appear more friendly and warm the atmosphere.

6. How can ChineseClass101 Help You Learn More Native Phrases?

Did you have a good time learning all the basic Chinese greeting phrases? If you didn’t get enough, ChineseClass101 will be your paradise for learning more advanced phrases in the Chinese language! It provides a variety of resources that can be easily understood. If you’re ready for more fun Chinese lessons, embark on your journey there soon!