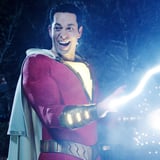 Can you remember the last time you saw a big screen superhero be genuinely, truly thrilled about their powers? Other than the exuberance of Peter Parker, every other hero as of late has been busy avenging their dead parents, feeling guilty about the worldwide destruction they’ve caused, or trying to figure out a way to revive their dead friends. As compelling as those stories are, they aren’t always fun – that’s where Shazam comes in.

Like a lighting bolt of fresh air, Zachary Levi’s titular hero in 2019’s Shazam! is suitably “stoked” to be able to zip through the air whenever he wants, lift up a falling bus with his bare hands, and hold his own against a villain wielding seven deadly sins-worth of powers. And who wouldn’t be? Well . . . a jaded adult, probably. But Levi’s Billy Batson isn’t an adult. (At least not all the time.) Despite the giant muscles and towering frame, Levi’s version of the character is actually the adult alter-ego of a mischievous 14-year-old foster kid, played in the film by Disney Channel alum Asher Angel.

Now that he’s on the cusp of being a household name – to those of you who have been depriving yourselves of the joy that comes from watching Chuck or season two of The Marvelous Mrs. Maisel, of course – I hopped on the phone with a very excited Levi to discuss everything from what it was like to film all those flying scenes (not fun, “particularly if you’re a dude”) to what he’d like to see in a potential sequel.

POPSUGAR: What’s it like to play a superhero who’s actually excited to be a superhero, for once? Not tortured or seeking revenge.

Zachary Levi: Basically what you’re watching on the screen is just me not reigning in all of my own genuine enthusiasm for what was, and is happening in my life. I was a little kid who dreamed about being a superhero – that’s happening. I was an actor who dreamed about portraying a bonafide superhero of my own, leading a big franchise and not supporting someone else – that’s happening. What you see onscreen is the kid inside of me, or rather just the man-child that I am [laughs] being very stoked and trying to bring that to life as authentically as I could.

I’m super grateful that I, like you said, get to play a different type of a superhero. It’s a different take on the genre. The closest other character I can think of who’s similar to Billy Batson is Peter Parker. There’s a youth and an excitement about the powers that they’ve now gotten, and wanting to use them for good. That made it a heck of a lot of fun. God knows, plenty of other incredible actors have been super stoked to get these superhero jobs and they’re giddy and excited, and then the camera starts rolling and they’ve gotta be like [using a deep voice] “I’m Batman.” It’s gotta be real serious. I’m glad I didn’t have to reign any of that in.

PS: There are some really funny moments throughout the film, and I loved that the humor is able to be a bit edgier than the average superhero movie. Also, how almost disturbingly dark it gets with Mark Strong’s villain. Like that conference room scene?

PS: Nightmares. Did that aspect of the script appeal to you?

ZL: Oh, 100 percent. The DNA of the movie is so naturally there. It’s a movie about a 14-year-old boy who’s given a magic word to transform into being the superhero version of himself. It’s Big meets Superman. That, inherently, is gonna have lots of heart and lots of humor. So when I found out that David Sandberg was going to be our director, I genuinely thought it was such an inspired choice by the studio. Having come from a horror background, what he was going to be able to do was help juggle and balance that lighter side that we were already going to have. It wasn’t like we needed someone to punch up or extrapolate the humor or the heart in the film – that’s already there in the characters. You need to have that other side that’s a little darker, a little kookier, a little creepy. That helps balance the whole meal. It really takes people by surprise, which is great.

PS: You play “the full potential” version of Asher Angel’s Billy, but he’s still very much the troubled teen that Asher plays despite how excited he is about his powers. How involved were the two of you in the fleshing out his character and linking your performances, so to speak?

ZL: We actually had a little bit of rehearsal time before we started shooting, and David, Asher, and I would be in the room, and David and Asher would run through various scenes. I was there to observe, more than anything, and try to capture as much essence of him as I could. Really just both of us trusting David to direct both of us, since neither of us were really ever in the same place at the same time. But also, we’re both trying to play Billy. It was less about me trying to be him, or him trying to be me, but both of us trying to be Billy as best we could. That was kind of more the game plan, I think.

PS: The rapport between both versions of Billy and Jack Dylan Grazer’s character, Freddy, are hilarious – was there a lot of riffing going on during your scenes with him?

ZL: Oh, tons. David was very gracious in that he allowed myself, Jack, really all of us, room to riff, to ad-lib, and improv, and inhabit the characters and bring them to life. I think people definitely feel that, because there are a lot of moments that feel like we just made them up on the spot, and there were. We made them up on the spot! But you’re only able to do that if you’ve got a scene partner who knows how to do that, and I’m so grateful that of all the 14-year-old kids that they found, they found Jack, who really . . . he and I have a similar understanding of comedy. You know, I’ve got a few more years . . . well, 24 more years on him. [laughs] But nonetheless he’s got such an old soul and a sharp mind, and just naturally talented and funny.

“It’s Big meets Superman. That, inherently, is gonna have lots of heart and lots of humor.”

We had a ball doing all that stuff. David giving us the freedom to do that was such a blessing. But also, we were improving and riffing what was already a great template with the script. Henry Gayden wrote such a great script. You’ve got the structure and the beats, and a lot of the lines, if we did riff on them, were alts of what was already written. The heart of it, and the essence of what we were trying to accomplish, was already given to us. It was awesome.

PS: What was your experience like filming all those flying scenes?

ZL: All of the harness work was difficult. Those harnesses are just not comfortable at all, particularly if you’re a dude. There was a lot of harness work, because we flew a lot. But you get through it, you grin and bear it, and then you get to go watch the finished product, and I’m fucking flying on a movie screen, so it’s completely worth it, you know?

PS: On that note, I’d love to talk a little bit about the suit, because I know you’re already a tall guy but it looked gigantic. Was it hard to get into that thing everyday?

ZL: On one hand it was amazing, because it was a total dream coming true with the spandex and cape and all that. So cool. And it has actual practical lighting in it; the chest really lit up, and the gauntlets really lit up, so I felt like a walking, talking, action figure. It was real fun. That said, it was insanely uncomfortable and very difficult to go to the bathroom in. It was a bit bulky. There are a lot of layers that are packed in there, you know? Obviously I’ve been working out like a madman and putting on quite a bit of weight, getting healthier and stronger than I’ve ever been in my life, and I’m super grateful for that, but you still have to have some augmentation in those suits in order for it to translate on camera at all times.

I also had to have a bunch of warm layers on underneath because we were shooting in Toronto in the middle of Winter, freezing my ass off. I mean, I was stuffed into that thing. It was so tight. Fortunately I had awesome costumers with me every day who helped me get into and out of it. It only took about 10 minutes to get into it fully, and five minutes to get out of it. To be honest, it kind of made me feel like a 4-year-old again, when your parents are putting your clothes on.

An Explanation For Why Shazam!’s Ominous Midcredits Scene Is So Important

PS: I have to say I did note that moment in the big fight scene at the end when Shazam gets ripped back by his cape – it made me think of Edna Mode’s “no cape” rule in The Incredibles. Are you still pro-cape, or no cape?

ZL: Pro-cape or no cape? [laughs] Well I gotta go pro-cape, right? Because my guy wears the cape. So I’m totes pro-cape.

PS: Alright, that’s fair. I can accept that. So, switching gears from your cape, there are a few moments towards the end of the movie that hint at expanding the world of Shazam – the Superman cameo, the appearance of Mister Mind in the mid-credits scene. If a sequel happens, what would you ideally want to see Billy doing, or who would you want him to team up with?

ZL: What we’ve laid out for the end of the movie feels like a really fun direction that we can go in. Going and fighting some of the classic villains would be so delicious, and Mister Mind is one of those villains. Ultimately down the road, Shazam and Black Adam need to have their showdown. I don’t know if that’s the next [film] or the next one after that. But as far as team-ups, all of it is so above my pay grade, but I really hope they make me a part of the Justice League. I hope I get to team up with all of those badasses. Shazam and Superman fighting against each other, and then fighting with each other would be supercool, like we’ve seen in the comics before.

One of the coolest things about how they’ve rebooted this, the Geoff Johns New 52 comic that then made its way into our film, is the “Shazam-ily,” as I like to call it. I’m so glad we were able to keep it under wraps for so long, and it’s really been delighting people. It’s a real, big time, wish-fulfillment moment, and there’s a whole bunch of ways we can go with that stuff. I’m just stoked for all of it.

PS: Did you get a chance to bond with the cast playing the older versions of Billy’s foster family at all?

ZL: Of course, yeah! I’m just really grateful now that the movie is coming out and now everyone will be able to know, and know that they’re in it and be able to congratulate them on it. It’s been a big secret that we’ve been holding on to.

Shazam! is now in theaters.