They dueted on ‘Will The Circle Be Unbroken’ in
Ireland 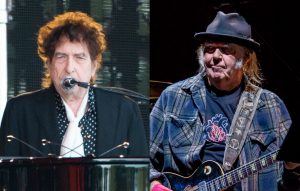 Yesterday (July 14), Bob Dylan and Neil Young dueted
onstage together for the first time in 25 years.

The two legends wrapped their co-headlining show in Kilkenny,
Ireland on Sunday with a duet of the hymn ‘Will The Circle Be
Unbroken’. Dylan had recorded a version of the hymn with The Band
in 1967, which was released in 2014 on ‘The Bootleg Series Vol.
11: The Basement Tapes Complete’.

The last time Dylan and Young performed onstage together was at
New York’s Roseland Ballroom in 1994, and they first performed
‘Will The Circle Be Unbroken’ together in 1975 at Kezar Stadium
in San Francisco, Rolling
Stone reports. Watch fan-shot footage of last night’s duet
here:

Though the Kilkenny show will be re-broadcast via the
subscription service Neil Young Archives sometime later this week,
the stream will not include their duet, Young announced on social
media. See his post and a snippet of the duet below:

LIVE STREAM
KILKENNY REBROADCAST 07-14-19 Ireland While the NY + POTR stream
worked for many, there were still issues with some browsers and ios
devices. DANG NABBIT#@*?!! We promise to get to the bottom of it
and sort it out! In the meantime we’ve decided to re-broadcast
the Kilkenny show for you all on The Archives for 24 hours sometime
this week. Stay tuned! Thanks for listening – NYA ( p.s. – it
won’t include this song… this is just a little snippet from a
cell phone, peace )

Dylan and Young’s concert in Ireland followed their
highly anticipated show at Hyde Park in London last Friday
(July 12). “Here’s to these two icons doing exactly what the
hell they want, whenever they want,”
NME wrote in its review of the show. “Sometimes it sounds
like we expect and sometimes it doesn’t, but it’s always a
thrill.”

The post
Watch Bob Dylan and Neil Young perform together for the first time
in 25 years appeared first on NME.